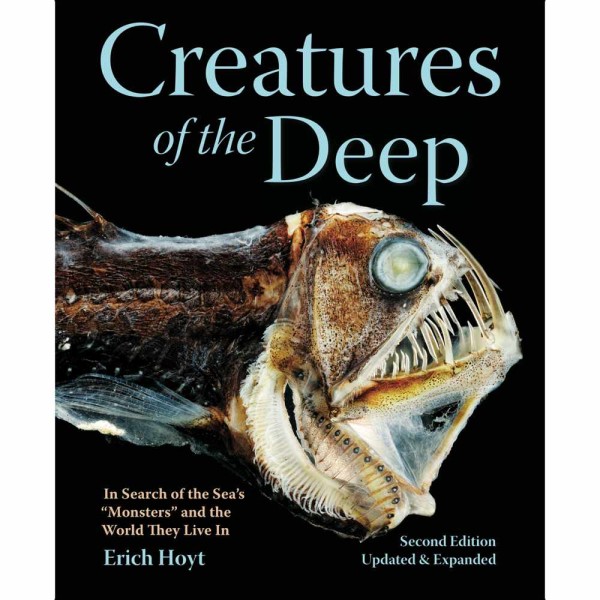 Creatures of the Deep

“There’s no end to the ocean’s mystery. Earth’s 336-million cubic miles of ocean is richly inhabited, and Creatures of the Deep is a magnificent bestiary of that watery world.” — Popular Science

“Creatures of the Deep expands and updates the prize-winning first edition of 2001. Much has happened in ocean science since then, and Erich Hoyt captures the excitement and beauty of recent advances. With lavish photos and engaging, accurate prose, he takes readers on a journey of wonder through the ocean’s layers and around the planet, shedding light on extraordinary lives. The deeper you go, the less we know — only a few hundred of the thousands of species that live in the abyss have been photographed. Hoyt’s book showcases why we must do more to safeguard life in the sea.”
— Review by Prof. Callum Roberts, York University, and author The Unnatural History of the Sea, in BBC Wildlife Magazine, March 2015

“Creatures of the Deep has the external appearance of a beautiful coffee-table book, but internally offers much more. It resembles two previous works: The Deep, edited by Clair Nouvian (2007) and Into the Deep by Karsten Schneider and Peter Batson (2008), both primarily picture books with good photography. However, Hoyt’s work offers a knowledgeable narrative to accompany the excellent illustrations. In addition to its visual appeal, this work has considerable academic value. Highly Recommended.***” — Review in Choice, April 2015

“Erich Hoyt reminds us that humanity has been terrified and fascinated by the deepest oceans for a very long time. Until fairly recently, this was a hidden realm that inspired fantastical tales but over the past few decades our understanding of an astonishing environment has expanded in countless ways…Hoyt’s book, in this updated and expanded edition, is sure to snap even the most jaded nature watcher out of complacency…The pictures are stunning, the prose is clean, and you will gain a renewed sense of admiration for the scientists who are exploring this bewildering territory. One of the book’s greatest strengths is that it reports back from the front lines of research…Hoyt brings learning and passion to the task of unveiling the most bizarre habitat on the planet.” — Jonathan Wright, Geographical Magazine, Feb. 2015

This could be some species of young, maybe female beaked whale? No teeth, at least in evidence, & usually beaked whales are IDed from teeth position particularly in the males. @StaceyEleanorG

Can anyone identify?
Miles from the sea, but close enough i suppose to wee pockets of water on Ribble Estuary.#Winterwatch